My Wife's Unrelenting Pressure Forced Me into Robbery - Suspect. 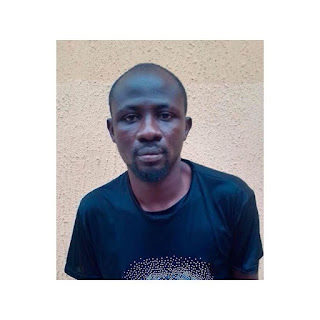 A 38 year old suspect Ibrahim Kazeem has his wife constant demand for money to blame for his decision to go into robbery.
According to TheNation, Kazeem, the leader of a four-man robbery  gang, specializes in beating up his victims after robbing them of their possessions, was arrested recently in Lagos State.

In an interview, he narrated: “I am the first child of my parents, who are now late. One of my brothers is a 500 level Industrial Chemistry student in one of the universities in Nigeria. .

Another sibling of his is in secondary school, while two others are learning handiwork here in Lagos; I am the one taking care of them. My problems started when I married my wife. She gave me children, but she did not obey me. .

Instead, she continued to make more demands that overstretched me.         Instead of cutting her coat according to her size, she would tell me to do what real men do, no matter the risk. .

There was one soup I told her that I used to do charm, and that on no account must she touch it. When I went to work, she went and destroyed the charm, despite my warning to her that if the soap is destroyed I would die. .

Having realized that she had no value for my life, coupled with too many demands from her, I sent her away from my house.