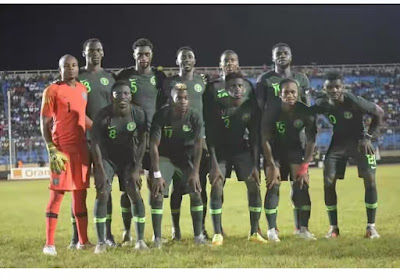 The Nigeria football team - Super Eagles, has qualified for the Africa Cup of Nations (AFCON) today after playing against their South African counter part at FNB Stadium Jo' bourg South Africa today.
The match which ended in a 1 - 1 draw, helped the Nigerian team to qualify for the cup. The first goal happened as an own goal from the Bafana Bafana - South African team player - Bahle Mkhwanazi in the first half, and the South African team equalized in the 26th minute with a goal from Lebo Mothiba.
And as a result the Super Eagles were able to win and qualify at the end or the match.
Well done guys, thumbs up.