MINISTER OF COW IN INDIA VOTED OUT BY ELECTION. 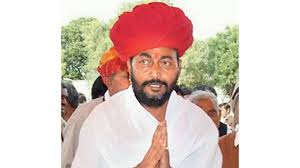 The first 'cow minister' to be produced by India - Otara Dewasi has lost in Sirohi seat to an independent candidate, Sanyam Lodha, News18 reports.

According to the report, Dewasi lost by a margin of over 10,000 votes. He had defeated Lodha in the same constituency in 2013 state elections by a margin of 24,439 votes.

He was elected to Rajasthan Assembly from Sirohi in 2008 as well.