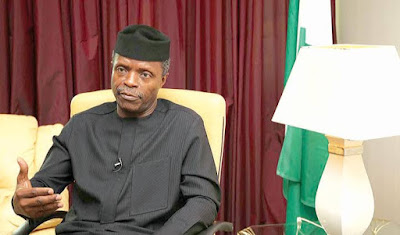 The Vice President of Nigeria - Prof. Yemi Osinbajo says since Buhari-led adninistration assumed office a total of N2.7 trillion has been spent on infrastructure.

Osinbajo made the disclosure at the palace of the Ovie of Ughelli, Oharisi III, during a courtesy visit to the monarch on the enumeration exercise of the TraderMoni scheme in the Ughelli main market, Vanguard reports.

Updatescrib gathers that the scheme would commence disbursement in the market in January 2019, with 30,000 beneficiaries getting N10,000 each.

The Vice president stressed that the federal government is committed to ensuring that monies belonging to Nigerians are not stolen but used for nation building.

He added that despite the fact that the country was earning 60 percent less than it earned in the past 10 years, the Buhari administration has spent more in building infrastructure than any other previous administrations.

Osinbajo explained that the federal government is focused on creating job opportunities for the common man and youths in the country.