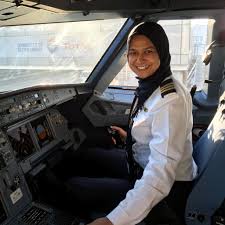 This is Fatima Jakoet the founder of Sakhikamva, a non-profit organisation that assist kids from less piviledged backgrounds.

She also happens to be the first South Africa Muslim woman to fly commercial airliners.   She achieved this feat in the year 2005, despite the fact of being viewed as a muslim   woman after 9/11 bombing.

Fatima Jakoet previously worked as a toxicologist and narcotics specialist at an Airport, Beautiful news reports.

She soon developed an interest in planes especially Boeing 747. Fatima then took the decision that she wanted to fly planes instead of watching them land and take off.

With her determination, Fatima joined BAE flight training College in Australia, where she took all her courses and passed with distinctions. She took to skies as a qualified pilot in the year 2005. 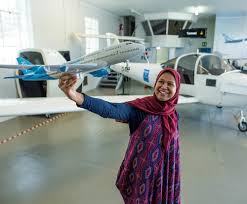 However, it was not easy for Fatima as a muslim woman  after a few year after 9/11 attacks. Fatima explained "it was very challenging being under a magnifying glass as a muslim woman, to understand how other view me and question my ability.

Nevertheless, this still pushed her to work even harder. Fatima Jakoet has now established herself in the aviation industry.

Her foundation Sakhikamva is a non-profit organisation which has helped over 50,000 kids from less priviledged backgrounds.