$1 BILLION TO FIGHT INSURGENCY HAS NOT BEEN APPROVED - Nigerian Army.


The 1 Billion dollars to fight insurgency and other Security challenges in the Country has not been released says the Nigerian Army.
Recall that in the year 2017, the National Economic council (NEC) approved the request of the Federal government to withdraw $1 billion from the excess crude account for the fight against insurgency.
In respect to the recent attack in Metele and other areas in Borno state where over 100 soldiers were reportedly killed, Nigerians asked why the Military was still using outdated weapons despite the approval of $1 billion.
Responding to this, the Spokesperson of the Nigerian Army - Sani Usman, in an interview with Nigeria Television Authority (NTA), yesterday night December 2nd said the money was still being processed. 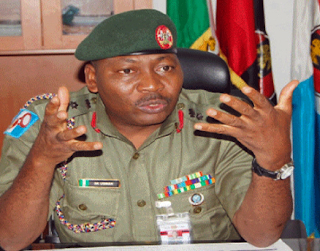 “People should understand also that this is a democratic system in which procurement and of course funding of defense related issues takes such a long time. Take for instance the issue of the $1 billion approved recently by Mr. President, up till now the process is ongoing. The ministry of defense is still pursuing the matter to the point that when it is done, the armed forces will definitely get more equipment, more arms and ammunition.” Sani said.

Speaking further, Sani said the Army has identified those that have spread fake news about the recent attacks on military base in Metele and that it's legal department is about to take them to court.

“So sad and unfortunate that our troops came under enemy attack on the 18th of last month and we suffered causality as we mentioned. Sadly, we lost 23 gallant officers and men and of course some of them sustained injuries. In respect of the effort, we are trying as much as possible to make sure that first and foremost we give timely and accurate information on all our activities and operations bearing national security concern. And then secondly, we have gone a north further to identify where those fake news and fabricated stories are coming from, and definitely our legal department is taking step to make sure that all those involved would be taken to court'' he said.