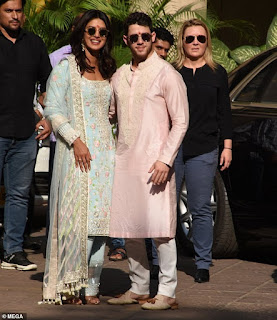 Bollywood star actress - Priyanka Chopra (36) officially ties the knot with her heartrob - Nick Jonas (26) an American artiste and are now pronounced as husband and wife.
The actress and the musician walked down the aisle in an Hindu ceremony, which was followed by a Christain ceremony that was pastored by Nick's pastor father - Paul Kevin Jonas at the luxurious Umuaid Bhawan Palace.

Priyanka who was adorned in a custom Ralph Lauren gown, while her new spouse was also dressed in thesame brand.
Ralph Lauren is a close ally of the new couple.
The entire wedding party was also designed with the designer gear, the men adorned in black tuxedos and the women wore pastels for the celebration on the black lawn.