UPDATE: HOW I INTEND TO ACHIEVE THE REDUCTION OF UNEMPLOYMENT IN NIGERIA - Ezekwesili 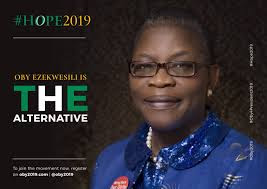 The presidential candidate of the Allied Congress Party of Nigeria (ACPN), Obiageli Ezekwesili, said that she would drastically reduce unemployment in the country if she emerges president.

Ezekwesili gave the assurance in statement, on Thursday, December 20, issued by her Hope’19 campaign organisation in Lagos.
The statement reveals that her assurance was in reaction to the data released by the Nigerian Bureau of Statistics (NBS) on Wednesday, December 19, that the unemployment rate had risen from 18.8per cent in the third quarter of 2017 to 23.1 per cent to the corresponding period in 2018.

The ACPN presidential candidate promised that no fewer than 80 million Nigerians would be lifted out of poverty by her administration.

She said that her administration would implement productivity and competitiveness initiatives to create new opportunities and jobs in some key sectors.

She listed the sectors as agriculture, fisheries, livestock, and agribusiness which according to her, more than one-third of Nigeria’s active labour population is found.

“There will be jobs from light manufacturing industries, construction, housing and public works, renewable solutions, services including trade, telecoms and technology, domestic tourism, and creative industries.

“These industries not only hold the key to putting more Nigerians to work, but provides a much-needed boost to the nation’s productivity.

“Promoting and supporting these industries will occur through a mix of sound policies on trade, tax, infrastructure, skills, training, and research and development,” Ezekwesili added.

She also said priority would be placed on building a rapidly expanding economy, which would be powered by the private sector based on an economic structural change agenda.

“A majority of those operating in the economy are in the informal, low productivity sectors, while previous governments have focused largely on the formal sector in their poverty reduction and ease of doing business agenda.

“The informal sector, according to the International Monetary Fund (IMF) is over 60 per cent of the Nigerian economy ($240bn).

“Unable to tackle the factors which lead to informality, such as low level of education, previous governments have chosen either to ignore the problem or militate against it.

“These barriers on them mean that those that work the hardest in our economies fail to earn a decent living.

“Investments in the formal sector over the last couple of years, while significant, have not yielded the kind of growth rates achieved by the informal sector.

“However, increased informality, if unchecked, could lead to higher rates of poverty and inequality.

“We will move to embed the productivity and competitiveness agenda within initiatives that give incentive for the nation’s informal businesses and workers to, on their own, enter the regulator inequality.

“This enables adequate access to government support, accounting, tax reform necessitated by a larger number of registered workers, and the capitalisation of investments in domestic industries.

“In order to revitalise key aspects of the economy and implement dramatic reform, the government will pay significant attention to the informal sector, as the principal creator of employment and as a catalyst for growth and development,” She said.

According to Ezekwesili, Nigeria’s growth and productivity can only happen when the people have lots of jobs and when they earn incomes that pull them out of poverty.

The former vice president of the World Bank said, “Right now, people simply do not have jobs. Under the present government, according to the Nigeria Bureau of Statistics (NBS) over 20 million Nigerians are unemployed.

“Again, think about that for a second. Those are not just numbers – they are humans; one, two, three, four, five, six, seven, eight million humans. They have families. They have people who depend on them.

“We all know someone who has lost a job in this economy. You may even be one of them. We all have families and friends who call us on the phone, pleading for any change we could spare at all to help them survive one more day.