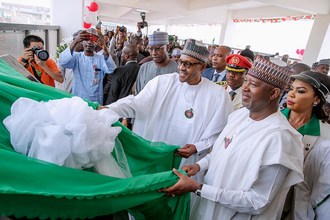 The President of Nigeria - President Muhamadu Buhari on Thursday, 20th of December, officially commissioned the new International terminal building at the Nnamdi Azikiwe International Airport, Abuja.
Updates crib reports that the president in his keynote address at the commissioning, said that the event represented another significant milestone for international air travellers in and out of the Federal Capital Territothe key points.

List of Points President Muhammadu Buhari made at commissioning of new Abuja airport terminal include:

1. "It gives me great pleasure to be here for the formal commissioning of the new Terminal at the Nnamdi Azikiwe International Airport, Abuja. This event represents yet another significant milestone for International air travellers in and out of the Federal Capital Territory.

2. ''You will recall that on the 25th October, 2018, I commissioned Port Harcourt International Airport Terminal. During the event, the Honourable Minister of State (Aviation) stated that the Nnamdi Azikiwe International Airport Terminal, Abuja would be completed and ready for commissioning before the end of the year. Today, that promise has been kept. I wish to commend the Honourable Minister and his team for a job well done.

3. ''With the commissioning of this Terminal, Nigeria is moving towards achieving and meeting global aviation standards in facilitation, passenger processing and service delivery in tandem with international best practices.

''This Administration recognises aviation as a catalyst for economic growth and as such will continue to encourage and support the actualization of projects that will place Nigerian Airports amongst the best in the world. 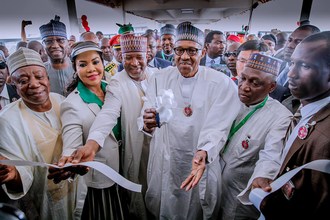 4. ''This event today, reflects Government’s deliberate policy to sustain the development of Nigeria’s infrastructure. We are gradually closing the infrastructural deficit bedevilling our country.

5. ''I am happy to note the progress being made in both the airports and sea ports on the implementation of the Executive Order on the Ease of Doing Business. Government officials manning these gateways are to sustain the momentum and ensure travellers in and out of the country have the best of experience as a necessary complement to the ultra-modern terminal.

6. ''Nnamdi Azikiwe International Airport terminal is the first airport terminal to be connected to rail transport system in the country and indeed in the region.

''This has provided passengers and other airport users with a choice in the mode of transport to and from the city centre. I recall taking a ride from the city metro station to the Airport on the day the rail line was commissioned. 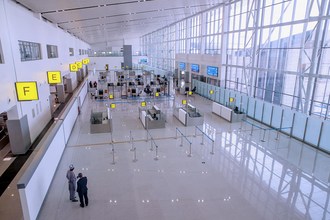 7. ''I wish to assure you therefore, that government remains committed to developing Nigeria into regional air transportation hub and thereby assuming its leadership in the aviation sub sector in Africa.

8. ''Let me once again appreciate the efforts of the federal ministry of transportation (Aviation), the government of the Peoples Republic of China and the China Exim Bank for their financial support and the various roles they played leading to the successful completion of this project. Let me also commend the contractor Messrs CCECC for delivering this project on time. 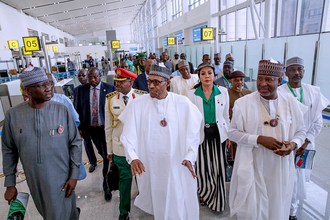 9. ''It is therefore, with great pleasure that I commission the new International Terminal building of Nnamdi Azikiwe International Airport, Abuja.