UPDATE: RESPECTED LAWYER REACTS TO REPORTS OF NIGERIA BEING TAGGED THE THIRD MOST TERRORISED NATION IN THE WORLD. 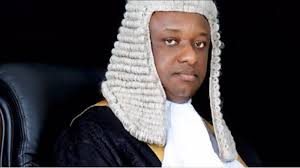 Respected Lawyer and a Senior Advocate of Nigeria (SAN)- Festus Keyamo has reacted to a report which claimed Nigeria is the third most terrorised nation in the World.

The 2018 Global Terrorism Index was released this week and Nigeria was named the third most terrorised Nation in the world at the moment. The index placed Nigeria after war-torn countries like Iraq and Afghanistan. 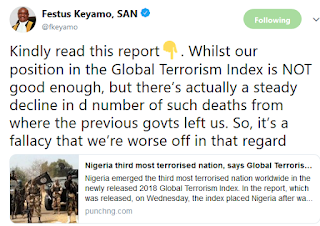 The report also shows that there is a drop in the number of deaths linked to terrorism. According to the report, total deaths from terrorism in Nigeria fell to 1,532 in 2017, a drop of 16% from the previous year.

Festus Keyamo mentioned on his twitter handle that there is something this government is doing in the fight against terrorist attack better than the previous government.