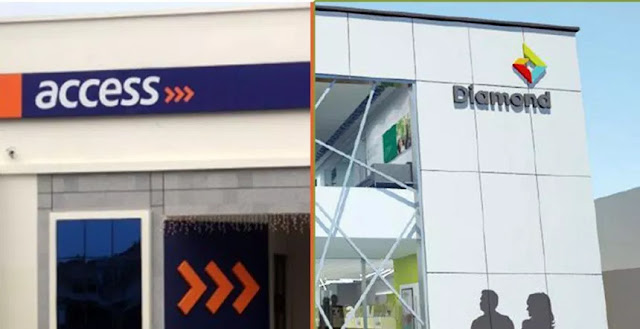 Commercial Banks - Access Bank and Diamond Bank Plc have obtained approval in principle from the Central Bank of Nigeria (CBN) and the Securities and Exchange Commission (SEC) on proposed merger plans.

Etuokwu said that the banks were awaiting the final approval which would be granted after convening shareholders meeting.

“So far, we have gotten approvals up to approval in principle. There are three approvals that we need for this process.

“The first one is the pre-order approval which is like the first approval, the next approval is the approval in principle.

“The final approval comes after approval in principle and it will come after you have convened your shareholders meetings,’’ Etuokwu said.

He also added that the banks would convene shareholders meetings in February, noting that the approval would be taken to court once approved by the shareholders.

Etuokwu said all the processes including final approval would be completed in the next 60 days.

He said that the new bank would remain committed to retail and corporate banking to drive financial inclusion for desired growth and development.

“We need to invest in retail market to drive economic growth. This is what the new bank will do, a strong corporate and a strong retail bank,’’ he said.

On the issue of staff retrenchment, Etuokwu said that members of staff would be retrained for different roles in case of overlapping.

“Staff will be retrained for new roles where there are overlaps, one of the branches can be converted to an e-branch or Automated Teller Machine (ATM) gallery,’’ he added.

Mr Robert Giles, in charge of Retail, Diamond Bank said that integration of both banks had commenced for seamless service delivery.

Giles said that ATMs of both banks could be used by customers at no cost, noting that they were committed at taking costs away from customers.

He said that the bank had also obtained “No Objection’’ from the CBN to undertake a Rights Issue to raise up to N75 billion or 207 million dollars in the first half of 2019.

Wigwe said that shareholder approvals and other regulatory approvals to that effect would be obtained before the offer opens.

He noted that the fund raising exercise would accelerate the capital management plan to support retail growth previously set out in the bank’s five-year strategy.

Wigwe said that the bigger entity was ready to absorb the staff of Diamond Bank at the completion of the deal by end of June, without any disengagement.