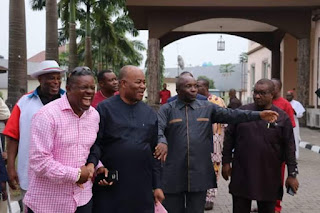 Godswil Akpabio,  former minority leader of the Senate claimed APC would win the election on a grand style.
In  a interview with the journalist in uyo,  Akpabio responded to questions of violence during the election following his defection from  PDP to APC.
He claimed Akwa Ibom has already decided on there candidate and there is no sense  for battle.
Akpabio said, “APC had long taken over Akwa Ibom even before I joined the party. By the time I decided to join APC, the whole state was APC."

Womens and men trooped out
to celebrate and the jubilation was really infectious.

He also revealed APC would win the state within three hours and there couldn't be any battle-ground or close tally.

Akpabio claimed it's not because of him but because of the change that the rulling party  has started. The reason I am being apprehended is just because I am a leader here and a lot of people welcomed me  when I joined, but the people have castoff PDP before I announced for APC.
POLITICS