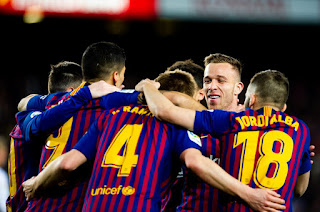 The defending champions qualified on a 6-3 aggregate after recording a 6-1 win in the fixture.

Ernesto Valverde's side knew they had to give a good fight to overturn the first leg the two-goal cushion in the first leg. And it did not take long for La Blaugrana to make their intentions known as Lionel Messi was fouled in the box and he handed the penalty kick to teammate Phillipe Coutinho.

The Brazilian buried the ball into the goalkeeper's right-hand corner to put his team back into the contest in the 13th minute to make it 1-0. In the 27th minute, Sevilla were also rewarded with their own penalty as Eva Benaga wasted the opportunity to restore the lead on aggregate.

Ivan Rakitic showed Barca prowess  by 2-0 in the 31st minute with a deaf touch after timing his run to perfection from an Arthur's pass to level the aggregate by 2-2.

The match was thrown wide open in the second half as Barcelona pushed further in getting more goals which they did in the 53rd minute. Coutinho completed his brace as the Catalan giants went up by 3-0 courtesy of an assist from Luiz Suarez. The La Liga champions scored their fourth as Sergi Roberto registered his name on the scoresheet as Messi provided the assist to make it 4-0 in the 54th minute.

Just when Barca was coasting to victory Sevilla were handed a lifeline as Guilherme Arana put the visitors back into the match from a Banega's pass in the 68th minute to make it 4-1. At this point Sevilla just needed one more goal to send the match into extra time as they piled up the pressure on the home side. Suarez scored in the 89th minute as Barcelona went ahead by a 5-1 as they sealed their place in the semi finals.

But Barcelona skipper was not done yet as he deservedly scored his goal in the 90th minute to put the game to final submission . It ended 6-1 at the Camp Nou.
SPORTS