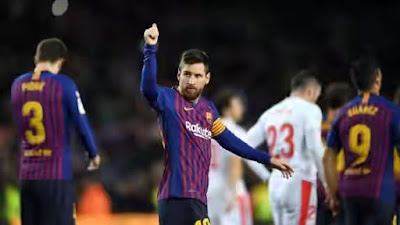 The argentine star player was rested for the match and watched Ousmane Dembele opened scoring in the 32nd minute.

However, the Leganes levelled 12 minutes after the break through a goal from Martin Braithwaite.

Ernesto Valverde eventually introduced Messi into the game before Luis Suarez made it 2-1.

Messi himself then sealed the win in added time.

In the table of standings: Barcelona now have 46 points, five more than second-placed Atletico Madrid, and 10 ahead of rivals Real Madrid.