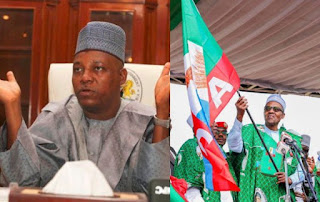 The  presidential candidate of APC, President Muhammadu Buhari is currently at Borno state to continue his campaign programme for the February presidential election.

The  president was  reported landed
at about 10:30am at the Nigerian Air Force wing of the Maiduguri International Airport.

He was received by the party National chairman, Minister of state for works, National security Adviser,  Borno state Governor and other dignitaries.

NAN reports that the Borno State Government had declared Monday public holiday to enable the residents to welcome the president.

The presidents would address
Thousands of party supporters at the
Ramat Square in Maiduguri, to cement up support for his re-election.