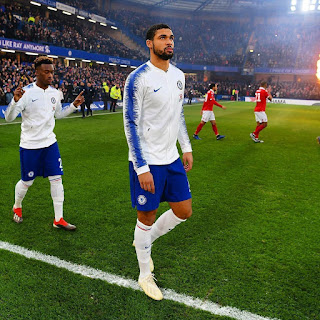 The Englishman has been impressive this season for Chelsea scoring six goals English professional football star Ruben Loftus Cheek who plays for Chelsea has denied reports suggesting that he is on the verge of having a male lover or already does. There have been reports that the 22-year-old midfielder has told his teammates at Stamford Bridge about his status. But the England international has rubbished the claims, but added that he will respect any Premier League player that chooses to go in the line of having a male lover. "Any player who came out as gay, they’d have my full support and respect. "But the rumor isn’t true." Ruben Loftus explained on social media.

Loftus-Cheek has impressive for the Blues when called upon by Maurizio Sarri this campaign, scoring six goals in 17 games in all competitions, but he is currently facing a spell on the sidelines with a back injury. Chelsea are currently occupying fourth position on the Premier League standings with 47 points after 22 games played this season.
It was  also reported that Spanish La Liga campaigners Atletico Madrid are reportedly in talks with Chelsea striker Alvaro Morata over a return to Spain before the transfer window closes. The 26-year-old Spanish footballer is currently struggling for form this season at Stamford Bridge and Chelsea manager Maurizio Sarri is said to have lost faith in him. According to the latest report, Alvaro Morata was spotted in Spain on Sunday night, January 13, but a fee has not been agreed between the two clubs.