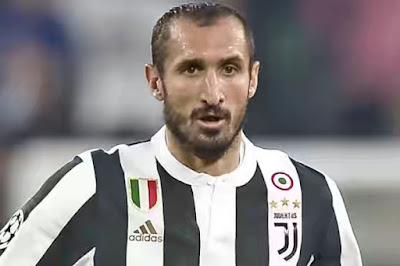 Juventus defender, Giorgio Chiellini, has named four clubs that can stop his side from winning this season’s Champions League.

Chiellini stated that Barcelona, Manchester City, Bayern Munich and Real Madrid could stop Juventus from winning the trophy this season.

The Serie A champions have been stopped twice by Real Madrid in recent times.

“We started in the first three months nearly in perfection but we know the most important period is from spring,” Express UK quoted Chiellini as saying.

“I think that we are one of the four or five teams who are favourites [for the Champions League] – Barcelona, Manchester City, Real Madrid, Bayern Munich can also win it.

“But also PSG and Atletico can reach the victory and we are so far away from the key matches still.”
SPORTS