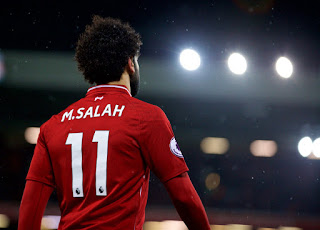 - Mohamed Salah has played the best football in the last two years in his career - The 26-year-old is currently joint-topscorer in the Premier League this season
- The Egyptian government plans to build a museum to honour his achievements Liverpool striker Mohamed Salah will have a museum built in Cairo to celebrate his achievement for his club and country, the Egyptian government revealed. The former Roma star who won his second consecutive African Player of The Year si currently joint top scorer in the Premier League. Sports minister Ashraf Sobhy revealed plans to build the museum at the Gezira Youth Centre in Cairo.
Sobhy said: "The surprise that I was preparing for Salah is the construction of a museum bearing his name at the Gezira Youth Centre in Cairo. "Salah is delivering outstanding performances with both Liverpool and the national team. "All Egyptians are proud of his achievements. "I hope that winning this year's title [of Africa's best player] will be a big boost for him to continue his achievements, and to deliver more outstanding performances at club level - as well as with the national team in the Africa Cup of Nations in Egypt next June."
Salah played an integral part in helping Liverpool reach Champions League final where they were beaten by eventual winners Real Madrid. The 26-year-old drew the world's sympathy when he suffered a nasty shoulder injury after being dragged down by Sergio Ramos. The injury affected his performance at the World Cup with the Pharaoh's as they could not get past the first round. Salah has scored 14 Premier League goals with three in the Champions League and his side Liverpool are four-points clear on the league table.  It was  reported that a bizarre statue of Liverpool star Mohamed Salah has been unveiled in Egypt. According to a report citing Egyptian newspaper al-Masry al-Youm, the bust, which shows the striker in celebration mood is currently on display at the World Youth Forum in Sharm El Sheikh.
SPORTS