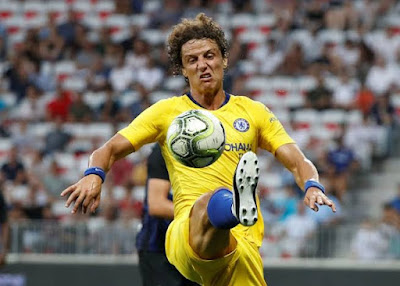 David Luiz Moreira of Chelsea FC, has blamed his fellow teammates following the 2-0 defeat they suffered from Arsenal in the english premier league last saturday.

Luiz blamed Chelsea players for not converting their chances in front of goal against the hosts.

Speaking on Chelsea’s 2-0 defeat to Arsenal, David Luiz was quoted by Independent UK as saying at post-match:
“The first 25 minutes we did not perform well, after that to control a team like Arsenal here with possession is never easy, especially in the second half we did that.

Goals from Alexandre Lacazette and Laurent Koscielny gave Arsenal all three points against Chelsea FC at the Emirates.

“The offensive phase starts with goalkeeper (Kepa Arrizabalaga), and proceeds with us the defenders, with everybody are to blame.”

David Luiz will now hope to lead Chelsea FC to victory when they tackle Bournemouth on Wednesday in their next Premier League fixture.
SPORTS