EPL: Gary Neville Reveals When Chelsea's Manager Will Be Sacked. 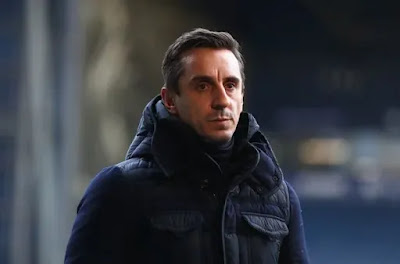 Gary Neville, former manchester united defender has stated that Chelsea manager, Maurizio Sarri is right to defending himself over his star players in his early stages of his tenure at Stamford bridge as Sarri will be sacked within two years.

Neville also claimed that every Chelsea manager has a short shelf life, and Maurizio Sarri is aware he will be booted from the club in the next two years, if not earlier.

He went on to label Sarri's players as "mentally weak" over their 2-0 defeat to arsenal at the emirates stadium last week.

“When managers have an aspect of control in the early parts of their jobs, they’ll have to seize it and basically will realise they are a difficult bunch at Chelsea.

“In the last 10-15 years, they’ve had the power to remove managers,” Gary Neville told Sky Sports.

“Maurizio Sarri knows he’s going to get sacked at some point in the next 18 months or two years, that’s inevitable at Chelsea, he concluded.