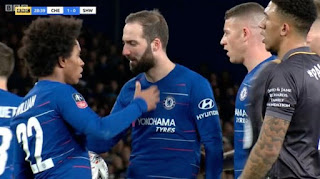 The Blues  were left stunned after witnessing Gonzalo Higuain turn down the chance to score on his debut.

Chelsea were awarded a penalty in the first half against Sheffield Wednesday after Cesar Azpilicueta was hacked down by Sam Hutchinson.

After Andre Marriner pointed to the spot, Brazil star Willian picked up the ball and walked over to his new team-mate.

The winger offered Higuain the penalty who, surprisingly, refused. The pair embraced before Willian walked over to the penalty spot to place the ball.


The Brazilian made no mistake and coolly convert the penalty to put the hosts 1-0 up.

Fans were left wowed by Higuain’s show of humility and immediately praised the actions of both Chelsea men.

The Argentina striker has joined Chelsea on loan for the remainder of the season.

Higuain had been plying his trade at AC Milan, where he scored eight goals in 22 appearances, but has now reunited with Maurizio Sarri with whom he played under at Napoli.