Honour my father by voting massively for Buhari. 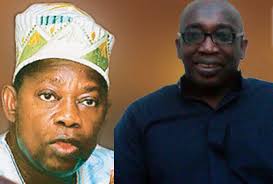 Abiola’s son Jamiu Abiola called on Yoruba people not to betray his father. The son of the late Chief MKO Abiola called for massive support for President Buhari - Jamiu described President Buhari as a detribalised Nigerian Jamiu Abiola who is the son of the winner of the annulled June 12, 1993 presidential election, Chief Moshood Abiola, has called on Yoruba people to honour his father by voting for President Muhammadu Buhari. Reports that Jamiu who is a member of the Directorate of Contact and Mobilisation of the Women and Youth Presidential Campaign Team described President Buhari as a detribalised leader.  He said Buhari would not have honoured his father 25 years after the annulment of the election if he was a tribalist. Abiola urged Yorubas not to betray his father and his slain wife, Kudirat. He said: “Buhari had even said in the letter of honour that June 12 is more important than the Independence Day, Nigerians should understand that and I believe that the Yoruba that I know will not betray Chief M.K.O Abiola in his grave by voting against a man who honoured him. “The Yoruba are known to appreciate and value anybody who genuinely does something good for them genuinely.” Meanwhile, following a visit to the Aso Rock Presidential Villa, the leadership of the Ohanaeze Ndigbo Youth Wing has denied endorsing President Muhammadu Buhari for a second term, during the visit. Some individuals and other Igbo youth groups had accused the Ohanaeze Ndigbo Youth Wing of working against the interest of Ndigbo.
POLITICS