I was misinterpreted to be corrupt - Atiku Abubakar 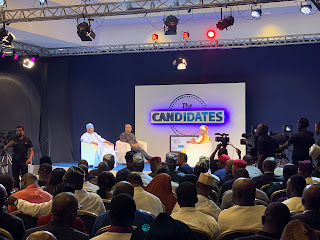 (NAN) reported that the custom allegation followed the controversial importation of 53 suit cases into the country in 1984 by a first class traditional ruler in the North.

Abubakar was the Customs Officer in Charge of the Murtala Muhammed International Airport when the suit cases were brought into the country.
It would be recalled that a United States Senate report had accused Atiku Abubakar of laundering over $40 million in suspicious funds into the United States between 2000 and 2008, using his fourth wife, Jennifer.

Abubakar said that he is the bridge between the future and the present, stressing that he had all it would take to get the country working again. He also noted that there was so much bottleneck in the country`s judicial system, adding that his administration would change the narrative if he became the country`s next president.

He further said that he would introduce a judicial reform that would address the bottlenecks in the judiciary, using legislative process as was obtainable in other countries. Abubakar, who was the country`s Vice President under the President Olusegun Obasanjo administration also said that if elected as the country`s next president, he would sustain the fight against corruption. NAN reports that Abubakar had a fractured relationship with Obasonjo, his former boss, but had to mend fences with him after he won the PDP ticket to fly the party`s flag in the coming presidential election slated for Feb. 16. Mr Peter Obi, Abubakar`s running mate and a former Governor of Anambra, who also featured at the town hall meeting, said Atiku had the capacity to address the country`s growing unemployment statistics.
If you look at his cumulative experience, his age notwithstanding, you will agree with me that he had what it will take to address the country`s developmental challenges,“ he said. Obi also refuted allegations that as governor of Anambra, he used his position to register a company with most of his family members as shareholders, saying he left large sums of money in the state account at the end of his regime.
NEWS POLITICS