Ibrahim Chaibou was handed a life ban for bribery and match-fixing by FIFA. 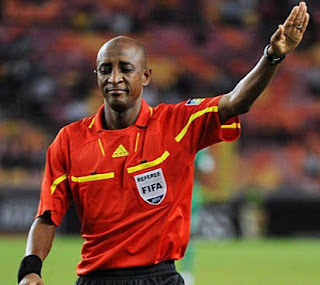 The 52-year-old referee was the centre referee when Nigeria hosted Argentina in June 2011 Ibrahim Chaibou, Niger referee, was on Thursday, January 25, slammed with a life ban for bribery and match-fixing by FIFA.
The world’s football’s governing body, FIFA, also slammed a 177,000 euros (about $226,000) fine on the 52-year-old Chaibou who is also barred from engaging in a football-related activities for life.

“Mr Chaibou has been banned for life from all football-related activities (administrative, sports or any other) at both national and international level,” a statement from FIFA’s independent Ethics Committee read in part.

Chaibou famously awarded several spot-kicks in a 2010 friendly game between South Africa and Guatemala which sparked an official probe.
At the last count, Chaibou’s career were key to revealing how international matches were manipulated for betting scams, forcing FIFA to change the rules for selecting referees after exposing convicted match-fixer Wilson Perumal.