Kane out till March 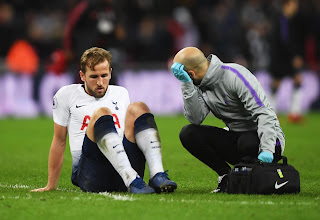 Tottenham striker Harry Kane will be out until March after injuring ankle ligaments in Sunday’s 1-0 Premier League defeat by Manchester United.

Spurs say the England captain, 25, will return to training in early March.

Kane, Tottenham’s top scorer this season with 20 goals, is likely to miss both legs of the Champions League last-16 tie with Borussia Dortmund.


He will also be unavailable for the second leg of the Carabao Cup semi-final against Chelsea on 24 January.

Kane injured his left ankle when he was caught between United’s Phil Jones and Victor Lindelof late in the game at Wembley.

Tottenham manager Mauricio Pochettino said after the match, “It was a clear foul on Harry Kane, a big hit. (Referee) Mike Dean said he didn’t see it.”


Spurs, who are third in the Premier League — nine points behind leaders Liverpool — look set to be without Kane for the games against Chelsea and Arsenal on 27 February and 2 March respectively.

Tottenham forward Son Heung-min is currently on international duty with South Korea at the Asia Cup in the United Arab Emirates.

Son, who has scored 12 goals, could be unavailable until February depending on how far South Korea progress. The final is on 1 February.

France midfielder Moussa Sissoko was replaced in the first half against United with what appeared to be a hamstring injury.