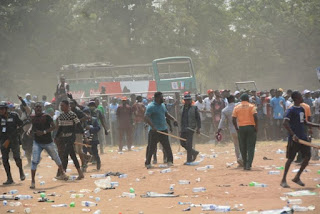 Kunle Rasheed, the publicist of Fuji maestro, Wasiu Ayinde Anifowoshe, a.k.a K1 De Ultimate, has narrated the events that led to the stabbing of National Union of Road Transport Workers (NURTW) Lagos State Treasurer, Musiliu Akinsanya, a.k.a MC Oluomo during the rally of the All Progressives Congress, APC, at the Skypower Grounds, Ikeja Government Reservation Area, GRA, a week ago.

The Nation quoted Rasheed as saying that the crisis started between NURTW State Auditor Adekunle Mustapha a.k.a Sego and Idumota Chairman Azeez Lawal, who is also known as Kunle Poly, on K1’s stage.

He said, “Both of them (Mustapha and Lawal) had issues on K1’s stage and K1 waded into the matter.

“At a point, Mustapha left the stage. Not quite long. MC Oluomo came on stage and exchanged greetings with K1, NURTW State Chairman, Tajudeen Agbede.

“As at that time, the boys of Sego and Kunle Poly had started fighting on the ground.

“So, it was not safe for MC Oluomo to leave the stage until one of Kunle Poly’s boys came on stage and threatening to kill MC Oluomo with a dagger. Agbede slapped him three times and chased him away. K1 also joined him to chase him away from the stage.

“He later returned to the stage and stabbed MC Oluomo and one Abija. That was how it happened.”

Rasheed pointed out that if not for K1, the crisis would have been bigger than that as he repeatedly talking to both warring parties to douse the tension.

“I was on the stage with them. I was there all through. K1 tried his best to resolve the crisis between the NURTW leaders over the State Chairmanship tussle even before that rally.

“People should stop accusing K1 of not doing enough to resolve their crisis,” he said.

Rasheed also denied that K1 abused Lagos State Governor Akinwunmi Ambode, which some said led the supporters of the governor to start the crisis.

He said that the track people were referring to had nothing to do with Ambode.

He continued, “If you check the new album he made for (Babajide) Sanwo-Owu, that track is there.

“He has even sang the track long before the crisis started. The track is all about APC and the party’s governorship candidate.”

Speaking on why K1 continued singing while Governor Ambode was making his speech, Rasheed said it was normal practice.

“If you are at the APC Convention in Abuja, the instruction was that as soon as someone is introduced, K1 will sing. Same thing happened at the Skypower Grounds, K1 started singing when Governor Ambode handed the party’s flag to Sanwo-Olu and that has nothing to do with the crisis. He didn’t abuse or insult Governor Ambode as some are peddling,” he said.