Monaco sack Thierry Henry and consider the return of Jardim 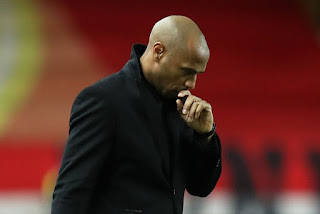 AS Monaco have sacked Thierry Henry after just 20 matches, with the club sitting in the relegation zone with 17 games remaining.

The name being linked with the job is Leonardo Jardim, the man who occupied the position before being dismissed after a poor start to the Ligue 1 campaign.


The  club made a statement on their website about the sacking of their legendary former player,

"The club announces that it has decided to suspend the functions of the head coach of the first team. Franck Passi will train the team from Friday," read a brief statement.

Monaco are already out of the Coupe de France as well as the Champions League and now have less than half a season to avoid a shock relegation for a side that won the league title in 2017.