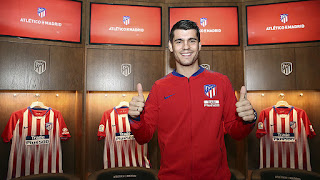 Atletico Madrid signing Alvaro Morata has expressed his happiness and excitement at returning to the club he played at as a child.

During his younger years, Morata would act as a ballboy and he made it clear that his dream was always to play on the pitch, albeit at the previous
Estadio Vicente Calderon .

"There were times where I had to wait at the gate with my father because, as ballboys, we had to be at the game two hours before it started," said Morata.
"I would enjoy myself and watch
Atletico .
"Whenever I see a ballboy, I see myself.
"I dreamt of someday being on that pitch."
The striker emphasised how pleased he is to have signed for Atletico .
"I am proud to be here," he added.
"I know the stadium, I know the shirts; I am very happy and proud to be here.
"I cannot wait to train, to be with my teammates and, above all, to be able to play here."
Before the move was even announced,
Morata stated that he had been watching Atletico 's games in anticipation of his arrival.
"I am very happy because it means so much to be here," he said.
"I've been thinking about it for a long time, and I've seen the team's last few matches.
"I've experienced them like I was already here.
"I felt like I was part of the team long ago, thanks to my teammates and the club.
"I am very motivated.
"I am going to give my all for this shirt and for this club."