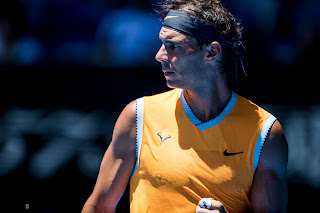 Rafael Nadal on Monday said he was delighted with his remodelled serve and his fitness levels after qualifying into the second round of the Australian Open.

After an injury-plagued 2018, the 17-time Grand Slam champion was back to his devastating old self as he raced through in 2hr 15min.

“It was good. It is normal that beginnings are tough, but every day helps and every day makes me feel better, makes me feel more confident,” said Nadal, who limped out of both the Australian and US Opens last year.

“So that’s an important victory because it is the first victory since a while, and at the same time, because that gives me the chance to be on court again. And that’s what I need today.”

Nadal had promised to unveil a remodelled, improved serve at the first Grand Slam of the year and the new action was going smoothly until he served for the match at 5-3 in the third set only for Duckworth to break to love.

It brought a huge ovation from the home supporters and another roar as the world number 238 held for 5-5. But Nadal insisted his new serve was not to blame.

“I played against a super-aggressive player. Believe me, he went on court probably doing a thing that works well for him, and it gave him some chances — he played smart and he played well.”

Nadal used all his experience to win his next service game from 15-30 down before breaking Duckworth again for the straight-sets win.

“When you play against a player that he wants to hit all the shots, of course you can have breaks against, because you are sometimes in his hands,” said Nadal.

“But anyway, my serve worked well. I don’t know my percentage, but was a lot of good positions after the first serve. I felt solid with the second.”

He will next play either another Australian Matthew Ebden or Germany’s Jan-Lennard Struff who face off later Monday.

Nadal pulled out of his Brisbane warm-up event two weeks ago with a thigh strain but insisted his injury woes were behind him.

“It was sad not to play in Brisbane. I had a small issue on the leg and the doctor wouldn’t allow me on court even if I wanted,” Nadal said.

“It’s always different pains appearing in the first weeks back after a while. I am trying to be better and better every day. I had a good week of practice before this tournament.