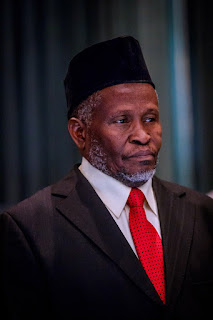 Saturday, January 26, in Abuja.  The new acting Chief Justice of Nigeria Muhammed Tanko appointed and swore in 250 members of the general elections tribunal.
He urged the new appointees to carry out their duties dignity, integrity and the fear of God.
During the swearing-in ceremony held in in Abuja on Saturday, Muhammed admonished the members of the election tribunals to carry out their duties with integrity and godly fear in their hearts.