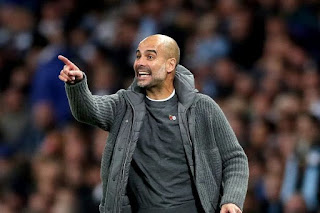 Newcastle  United came back from a goal down to stun Pep Guardiola 's Manchester City 2-1 at St James' Park on Tuesday night and land a big blow to their premier League title hopes.

On Pep Guardiola 's 100th Premier League game in charge of the Citizens , they got off to the perfect start when Sergio Aguero netted after 24 seconds from close range, with a David Silva diving header assist.
Aguero had a second goal harshly ruled out before the interval and that came back to bite them in the 66th minute when Salomon Rondon levelled with his sixth league goal of the campaign.

Twelve minutes later, the game was turned on its head when Fernandinho was loose in possession and gave away a penalty in trying to recover possession.

Matt Ritchie kept his cool from the spot to fire low under Ederson in what could be a decisive goal at both ends of the table.
SPORTS