No personal issues with isco -- Solari 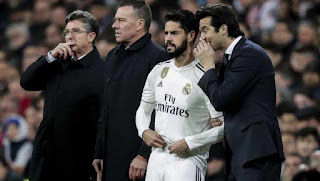 In the aftermath of Real Madrid 's 2-1 win over Real Betis , Santiago Solari insisted once more that he has no personal issues with any of his players.
Despite the injuries that have stacked up for Los Blancos, the coach once again left Isco out of the side and he was joined in being frozen out on this occasion by Marcelo .
In spite of those surprise changes as he opted for a new formation, the Real Madrid boss claimed that there are no problems with his players.
"I have to make decisions for specific moments," he told the media.
"We have many injured players, especially in attack, so I had to find solutions to try to win the game.
"Some will play and some will not.
"We have three competitions and there will be another game in three days, so players will get chances.
"There is nothing personal with anyone.
"I'm sorry to be repeating myself, but the squad is what it is and we do the best we can.
"Everyone can play and everyone is part of the group, I have said that from my first day here."
Solari , who confirmed that striker
Karim Benzema fractured a finger in his hand during the win, also had special praise for winning goal hero Dani Ceballos .
"He has those [ Betis] colours in his heart and I've also had to return to an old club," he said.
"It is an exciting moment for anyone and then there is the famous law of the ex that hurts so often.
"This time, it did so in our favour thanks to Dani .
"He did very well."