Olivier Giroud Unhappy At Chelsea, As Gonzalo Higuain Is Set To Arrive. 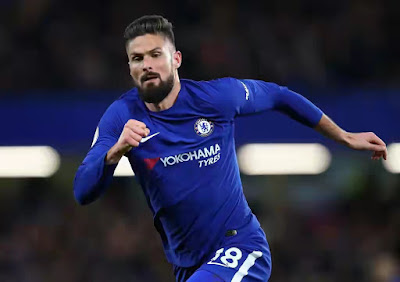 Chelsea Striker, Giroud has acknowledged the fact that he has found it difficult to accept not being Chelsea manager - Maurizzo Sarri's first choice striker.

Competition for places will increase with the arrival of juventus striker - Gonzalo Higuain who is on a loan until the end of the season, Giroud also revealed that he has found it tougher to earn the trust of Sarri after making a good start to his career in Chelsea under Antonio Conte.

He added that "it is not me who decides the squad, making the starting XI, but clearly every player wants to play every single game.

"As a competitor clearly I can't be happy staying on the bench, but I will keep the anger and frustration with me and change it into positive energy to work hard during match training.

The truth is that anytime I play from the start I like to bring something new to the team to play my role. But in these 14 games I started like maybe only half of them.

So it is a bit hard to be consistent. You need to play a few games in a row to be competitive, so that is what is a bit difficult in this last month.

"My first six months at Chelsea were very good for me. I needed to leave Arsenal because Arsene Wenger wanted to play with a different kind of striker".

My time was over in Arsenal, and I was really happy to sign in a big club like Chelsea FC, he added.