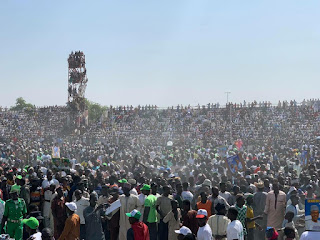 According to a report “We mobilised and went to the rally hoping we will be paid, but the officials have told us that they converted the allowances to feeding, something they didn’t discuss with us beforehand. We deserved to be paid in Kaltungo considering the risk we took”. "Some of the supporters at the rally were “contract supporters” not genuinely APC supporters as such they deserve their N2,000 agreed allowance. They promised they will pay us as soon as we reach Kaltungo, but until now we haven’t seen one Naira”. They were report to  that they were planning to stage the protest to draw the attention of Alhaji Mohammed Inuwa Yahaya the party’s gubernatorial candidate, with the hope that he would quickly intervene and correct the abnormalities saying, “We hope that the gubernatorial candidate can come to our rescue. We are responsible family men and women.” According to the report , all efforts made to have any of the party officials to speak about the matter proved abortive as during a visit to the APC state secretariat none of the officials was on seat while the staff met declined to comment. Meanwhile the director, media and publicity committee of the Peoples Democratic Party (PDP) campaign organization in Gombe state, Dahiru Hassan Kera, declared that the PDP would retain power in the state and also regain the presidential seat because according to him, “Nigerians have now discovered that the APC is a political party founded on deceit.” Hassan Kera also said that: “What happened in Kaltungo last week has opened the eyes of the people of Gombe. They have lost faith in the APC. They clearly saw the deceit of the APC and they are regretting.” He also mocked the flagging off of the gubernatorial campaign of the ruling All Progressive Congress (APC) in Gombe state as “the gathering of armature actors and a charade that will not yield any positive result”, saying that the gathering was an action in futility as the people of Gombe state know who truly have them at heart.  Meanwhile, we  previously reported that a governorship aspirant of the Peoples Democratic Party (PDP) in Gombe, Jamilu Isyaku Gwamna, boosted the 2019 campaign of President Muhammadu Buhari and the APC flag bearer in the state with the donation of a Marcopolo bus.