Pochettino Talks On Replacing Solskjaer’s After 1-0 defeat to Man Utd. 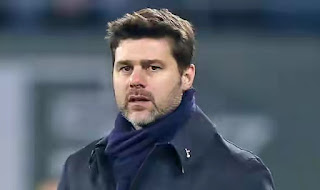 Mauricio Pochettino has insisted he wants to be the manager to take Spurs to the next step, amid continued speculation over whether he could join Manchester United.

Arguably the one disappointment of Pochettino’s reign in charge of Spurs, is that he has been unable to win a trophy.

Yet the Argentine suggested that the club’s transformation into a genuine contender for titles deserves greater credit.

Since Jose Mourinho was sacked by United last month, Pochettino has emerged as a leading candidate to take charge in the summer, alongside current caretaker Ole Gunnar Solskjaer and England manager Gareth Southgate.

Speaking to Sky Sports, he said: “The way we competed in the last game against Chelsea, not playing in the best way but in the end winning the game, showed that we are more mature and something different is growing.

“The next step is going to be bigger. I think Tottenham is preparing to be one of the most exciting clubs in the world and hopefully it’s with us. If it’s not with us, the legacy is going to massive for the next guy’s to work here with all the tools to work and be a real contender.”