Pogba back in consideration for captaincy duties -- Solskjaer 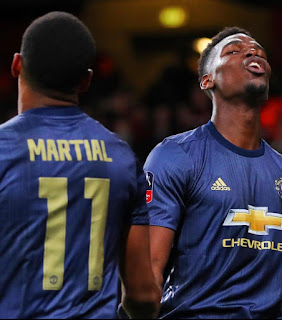 Gunnar Solskjaer says Paul Pogba is back in consideration for captaincy duties at Manchester United four months after being stripped of the role by Jose Mourinho.

“He is a leader,” Solskjaer told a news conference on Friday. “He’s a character, he influences people and you’ve seen the videos from France. He cares and he really wants to be successful.

Mourinho told Pogba in September he would no longer be considered for the armband but caretaker boss Solskjaer has reversed the decision.

“He knows he can’t do it by himself, it’s a team game and he’s a character that brings so many good things with him when he’s enjoying himself, I have to say.”

Pogba captained United nine times under Mourinho and  was named skipper for the first game of the season against Leicester. But just after a month he was stripped off captaincy while insisting there had been “no fall out” between the pair.


Pogba played from the  benched for Mourinho’s final three league games in charge at Old Trafford but has been all round involved  since his dismissal in December, scoring five goals in six starts under Solskjaer.

“When the performances come as well, that marries together as a good leader and you see what it meant to him winning the World Cup in what France broadcast. So for me, yes, he’s captain material.”

Solskjaer has cleared all doubts with seven straight wins cementing his case to be United  permanent manager but he insists he is not looking at winning the FA Cup simply to strengthen his own prospects.