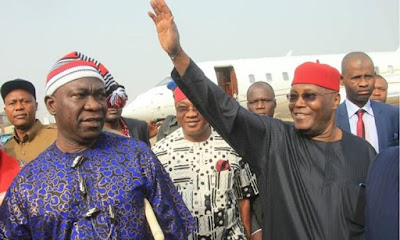 There are divisions on the Peoples Democratic Party’s presidential campaign as associates and supporters of the Deputy President of the Senate, Ike Ekweremadu, appear to be taking a back seat in the campaign process.

Earlier, the PDP had denied an earlier reported statement attributed to the Buhari Media Organisation that Ekweremadu and South-East governors were working for the success of the President Muhammadu Buhari’s re-election.

But an associate of Ekweremadu, who spoke with our correspondent on condition of anonymity over the issue on Friday, said the Deputy Senate President deliberately stayed away from the campaign of the party’s presidential candidate, Atiku Abubakar.

The source said Ekweremadu would not dissipate energy on a project that he was not considered worthy of playing any major role.

The source added, “The Deputy Senate President was not given any specific assignment in the Atiku Presidential Campaign Council, which I think is wrong. It is not proper that the PDP did not assign any national role to him in its presidential campaign.

“Ekweremadu was not even carried along when the PDP Presidential Campaign Council was constituted; he had no input at all. He also learnt of the composition, like other Nigerians, through the media. If Ekweremadu had not remained in the party, I doubt whether there would be any PDP to return to after the Supreme Court verdict that sacked the former national executive.

“It is wrong to say that he should campaign alongside his principal who is the director-general of the campaign council (Dr Saraki). In any case, Ekweremadu was in Gombe State to campaign for Atiku. He is currently concentrating on the South-East, which is his own constituency. He is specifically focusing on how to deliver the South-East region.”

The source added that it was wrong to  sneak that the South-East governors were not involved actively in the PDP presidential campaigns because they felt Ekweremadu had been sidelined.
He said, “The truth of the matter is that the governors are also concentrating on their own re-election. They will definitely show their power when the campaigns move to the South-East region.