Rashford Can Also Be As Good As Kane In Performance - Solskjaer. 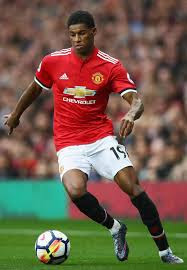 Manchester United boss -Ole Gunnar Solskjaer says Marcus Rashford has the ability to be as good as England teammate Harry Kane as the pair prepare to face-off in the Premier League this weekend.

Rashford looks reborn under interim coach Solskjaer, scoring three times in the centre-forward position as United have rattled off four straight league wins since the Norwegian took over from the sacked Mourinho in December to close in on the Champions League places.

Rashford is expected to line up as the spearhead of United’s attack when they face Kane’s Tottenham at Wembley on Sunday with both the team and striker on a hot run of form under the interim manager.

“He can become a top, top striker,” said Solskjaer. “We can talk about Harry Kane and his class and I’m sure Marcus as well. He’s got the potential to get up there.

Solskjaer sees Rashford’s academy background as valuable, suggesting the forward has learned from a young age about the attacking style traditionally associated with United.