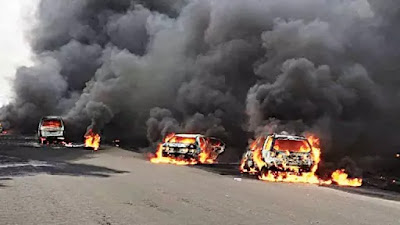 The Residents of the Abule Egba area of Lagos have raised the alarm over pollution of their sources of water supply by fuel that reportedly spilled from the petroleum pipeline vandalised by oil thieves on Wednesday, December 19, 2018.

Dug out wells which were the main sources of water supply to houses on Arowolo Street, Adeyemi Close and Segun Akinola Street, among others, had been polluted by petrol after the pipeline was vandalised.

With the dry season setting in, residents said getting clean water to use had become a herculean task as women and children had to trek long distances.

Some other houses also suffer a similar fate. Government officials came last December after the recent explosion to test the water but we haven’t seen the effect of that.

"The residents of the community stated that:
We want government and relevant organisations to come to our aid. The water here is not good and we need help. We don’t know how serious the health implication can be but we know it is dangerous to use this kind of polluted water.”