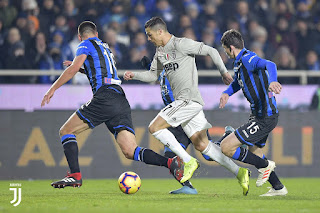 Atalanta were in the front foot from the start and capitalized on Juventus slump.

Atalanta and Juventus suffered injury setback after the Josip Ilicic and Chiellini limped off after suffering knocks. Juve brought in Joao Cancelo but he was caught in possession by Timothy Castagne, who dashed forward to smash the ball into the net for Atalanta’s opener.

Moments later, it was 2-0, as Zapata turned on the edge of the penalty area and hit a stunner that beat Szczesny and sailed into the net for his 16th goal in the last 10 matches for Atalanta.

Juve boss Max Allegri was sent off for dissent after throwing his coat on to the field of play. Cristiano Ronaldo and Paulo Dybala had free kicks from vintage positions to score but failed to make it count as they could not break Atalanta’s defence wall. In the closing minutes of the second half Zapata netted his second and Atalanta's third of the game to send Juventus packing from the Coppa Italia.

Atalanta is set to face Fiorentina in a two-legged semi-finals, after they humiliated Roma 7-1.