Ryan Giggs Reveals What Solskjaer Told Him About Jose Mourinho. 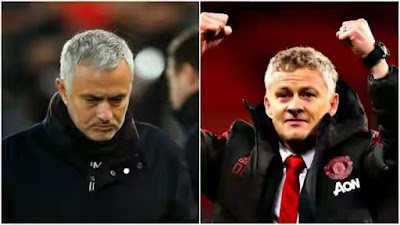 Former Manchester United winger, Ryan Giggs, has revealed the criticism Ole Gunnar Solskjaer had of the team under Jose Mourinho earlier in the season.

United endured a hugely disappointing start to the 2018/2019 campaign, dropping to eighth in the Premier League and crashing out of the Carabao Cup.

The club finally decided to sack Mourinho in December and named club legend Solskjaer as his replacement on a caretaker basis.

Giggs says Solskjaer has helped “remind the players how good they are” and revealed the Norwegian was critical of Mourinho’s use of his full-backs before his sacking.

Asked about the changes Solskjaer has made at Old Trafford, Giggs told Premier League Productions: “Well, reminding the players how good they are.
“Ole’s been to a few games before he took over. I was at a game next to him, and he was pointing out to me: “Look at the full-backs, they’re not high enough.”

“Things that we were used to, things that you associate with Man United teams.

“All of a sudden teams are going from, “right it’s Man United, we’ve got a chance today” to actually, “oh yeah, we’ll be defending, we’ll be deeper”.

“With the front players that United have got, not only the starting players but the ones coming off the bench, you’ve seen [Alexis] Sanchez, you’ve seen [Romelu] Lukaku now having an impact.
SPORTS