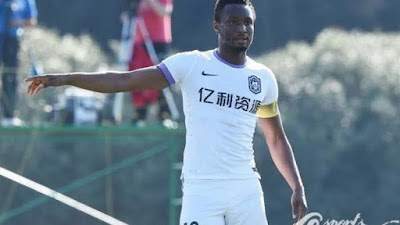 John Mikel Obi the captain of the Super Eagles of Nigeria has terminated his contract with Chinese topflight side Tianjin Teda two years after joining the club.

Tianjin Teda are currently in Spain for pre-season training, and Mikel Obi who is not part of the team that traveled confirmed that he is no longer a player of the team.

The former Chelsea star was reported to have reached an agreement with the Chinese club for him to leave after helping them to retain their status in the first division.

The 31-year-old ex Chelsea star stated he could make a return to Europe.

He is expected to lead Nigeria to the 2019 African Cup of Nations championship.