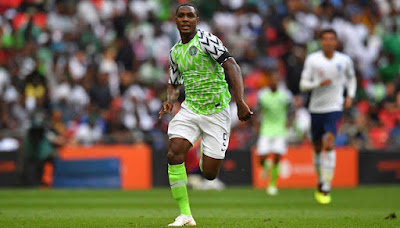 The Nigerian Super Eagles striker, Odion Ighalo, has emerged as an option for Barcelona, who want to sign a No. 9 in the winter window, to cover for the departures of Munir El Haddadi and Denis Suarez, according to Sport.

Ighalo has many offers to return to Europe, after leaving Watford to play for Changchun Yatai in China for two years.

Changchun Yatai have been relegated to the second division and Ighalo wants to come back to European football.

He has three offers from the Premier League, but Barca will be an attractive option.

Barcelona’s scouts know Ighalo well as he was at Granada. He scored 12 and 15 goals in his two seasons with Watford, who sold him to China for 25m.

The La Liga champions want a low-cost option as a player to complete their team.
SPORTS