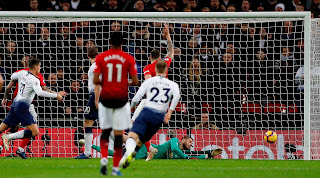 Manchester United goalkeeper David de Gea is confident the Red Devils can finish in the top four at the end of the season.

De Gea made 11 outstanding saves to help Manchester United record a 1-0 away win over Tottenham Hotspur at the Wembley stadium.

The win was Manchester United’s six in a row in all competitions. Premier League victories against Spurs, Cardiff, Huddersfield, Bournemouth and Newcastle, as well as a FA Cup third-round win at home to Reading, have seen Solskjaer’s stock rise.

The win also moves Manchester United within six points of the top four.

“All of the saves are important, especially if we win the game. I am very happy with my performance. The team is playing very well, creating chances and playing more attacking football.

“We had three clean sheets in a row which is very good. The players are happy, you can see that on the pitch, they play with passion, like Manchester United.