What I would do If I am defeated in February election -- President Buhari. 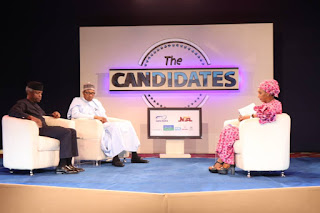 NEWS :  Come out if you have evidence of corruption against my administration - Buhari to Nigerians

- The president however said due process will be followed prosecuting them - Buhari said he would gladly leave office if voted out in February President Muhammadu Buhari has urged persons or organisations with any evidence of corrupt practices against members of his administration to come forward with such evidences to him for prompt action. The president gave the challenge at a town hall meeting tagged: ‘The Candidates’ organised by the MacArthur Foundation, in collaboration with NTA and DARIA Media in Abuja on Wednesday, January 16 night.

President Buhari was fielding questions on the allegations that the government’s anti-corruption crusade was skewed against a section of Nigerians, and that members of the governing All Progressives Congress (APC) with questionable credentials were being protected by the government. The moderator of the programme Kadaria Ahmed, specifically cited the former Secretary to the Government of the Federation Babachir Lawal, who was relieved of his appointment over allegations of corrupt practices, but was not prosecuted, instead he had been seen campaigning for the president. However, President Buhari said: “That is not fair criticism of the government. I do not think there is anybody that is being pointed out as corrupt in this dispensation which we looked the other direction. “I told you why I have to be careful; the public should help us, if there are strong allegations that are backed up with evidences, bank accounts, names of companies floated and contracts awarded. “Then we will take them before the courts through the EFCC and ICPC; and we have to trust the system and allow them to complete investigation. “If we just take people in as we did during the military and lock them up, the present democracy a multi party democracy does not approve of that. “If you accuse any person, you have to provide evidence in court for him to be prosecuted. So, if there is strong allegations, the government may decide to ask people to go, like in the case of the former Secretary to the Government of the Federation, we asked him to go. “The matter is already before the EFCC and I believe that a directive has been issued to charge him and all persons who have cases before the EFCC.’’ He reiterated that his administration would not tolerate any form of corrupt practices from any quarters, saying those making allegations should be able to provide evidence why the accused should be prosecuted. On whether he will accept the outcome of the forthcoming general elections, President Buhari said even though he was optimistic of winning the election, he would gladly accept the results. The president narrated how he accepted the results of previous elections in 2003, 2007 and 2011 even after challenging the results at the relevant courts. He said: “It won’t be the first time I will lose election. “I tried 2003 and I was in Court for 13 months, 2007. I was in court for 18 months in 2011 and went up to the Supreme Court. I sat down and said; `God Dey’, and for the fourth time, God and technology helped me.