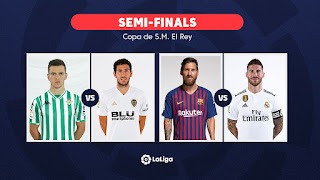 Barcelona and Real Madrid will do duel in the Copa del Rey semi-finals, while Valencia face Real Betis in the tournament's other clash.

A chance of a Clasico cup final is not feasible as many were hoping, but the two great rivals will square up over two legs for a spot in the Villamaríns showdown.

The first of the two semi-final matches will take place on 6 February at the
Camp Nou at 9.30pm CET.

Then, two El Clasico matchups will be witnessed at the Estadio Santiago Bernabeu in four days: first on 27 February for the second leg, before their LaLiga Santander meeting.

It will be the eighth two-legged semi-final matchup between the pair, with the last one coming in the 2012/13 season which saw Madrid win 4-2 on aggregate.

Madrid and Barcelona last met in the competition during the 2014 final where Los Blancos won 2-1 in extra-time through a Gareth Bale trademark goal.

Real Betis and Valencia will compete in the other semi-final, with the former having the added motivation of reaching the grand final which will be hosted at their home stadium.
SPORTS