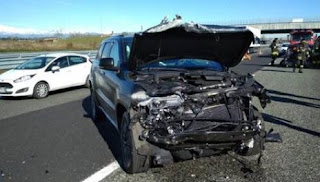 Douglas Costa was lucky to have coming out of a terrible motor accident untouched. The Brazilian star  was not injured in an incident that left his car totally wrecked.

Costa initially joined Juve on a loan deal from Bayern Munich and made his move permanent in 2018 but has not really made his case since then. He has delivered one goal, two assists in 24 games in all competitions for the Old Lady this campaign.

Corriere Torino reports that the accident happened between Livorno Ferraris and Santhia in the province of Vercelli, on the Turin-Milan motorway.

It was  further revealed that Costa's Jeep Cherokee crashed into a Fiat Punto and the 47-year-old driver driving the other car was taken to the Hospital after suffering injuries, though the severity of his condition has not been revealed.
However, no one has been able to recount how the accident started, as the crash is currently being investigated by the Novara Est traffic police.