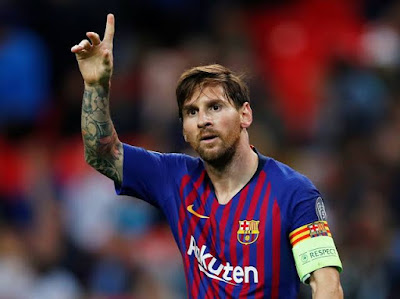 Argentine international and Barcelona captain, Lionel Messi, on Saturday 23rd of Feburary 2019, made history in his clubside’s 4-2 win over Sevilla in the La Liga encounter at the Estadio Ramon Stadium.

Three goals from Lionel Messi and a goal from Luis Suarez gave the Spanish giant all three points against Sevilla.

However, a goal from Jesus Navas and Gabriel Mercado was not enough to give the hosts a point against the Catalan club.

According to Barcablaugranes, Messi’s hat-trick against Sevilla means the Argentine captain has now scored 50 hat-tricks in his career for club (44) and country (6).

The result has shown Barcelona move 10 points clear ahead of second-placed, Atletico Madrid at the top of the La Liga table.

Messi will hope to lead Barcelona to victory when they play against Real Madrid in the second-leg of their Copa del Rey semi-final clash on Wednesday.
SPORTS