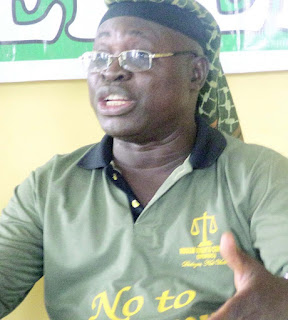 The Muslim Rights Concern(MURIC) faulted the meeting of the Vice President with NBA delegation over the suspended CJN, Justice Walter Onnoghen by President Muhammadu Buhari.

The purpose of the meeting was reviewing the suspension, and also going soft on the suspended CJN.

1 CJN to resign or retire without coercion; 2. Govt to withdraw all charges against Onnoghen. 3. No molestation of CJN under any guise; 4. Acting CJN should quit. 5. NBA team to prevail on relatives, friends to persuade Justice Onnoghen to resign. 6. Consensus on the need to clean up the Judiciary (long term measure).

MURIC reacted to this in a statement signed by the founder and director of the organization, Professor Ishaq Akintola.

MURIC said, “We accept option number 1 with an amendment. We have always said that the suspended CJN must resign.

“Retirement is not on the table. But the idea of ‘without coercion’ is outrageous. Who has been coercing the suspended CJN?

“Who has this administration coerced before? It is obvious that the NBA team came with a mindset and that is not good enough in dialogue. Why should they start with name-calling?

“Who are they trying to label as a tyrant? That option should be reviewed. Onnoghen should resign not only in the interest of the nation but also to save the judiciary from this monumental embarrassment.

“Option 2 is unacceptable. Why should government withdraw all charges? Now we can see how unnecessary plea-bargaining begins.

“We usually forget that every celebrated matter like this one, particularly those involving public figures and government officials are always placed first in the court of public opinion. Lawyers may bring technicalities but Nigerians are not fools.

“The man in the street is going to ask for the rationale for dropping charges. The number of criminals will increase because people are angry that a whole CJN allegedly got 55 houses in Abuja city alone with more than N1.1 billion cash in the kitty by robbing with the pen.

“So why shouldn’t armed robbers rob with the gun? This suggestion brings the contradictions in our society more clearly and rudely to the forefront. It should not be tried because it will create another bad precedent.

“This is a case in which government has to be firm. How do we create a deterrent for others? We have no doubt that other judges who have the noun ‘thief’ and the verb ‘to steal’ will expect plea bargain championed by the NBA in future?

“Option 3 is superfluous, malicious, suggestive and ill-motivated. NBA is asking government not to molest the CJN. It is also implied in option 1. What exactly does NBA mean by molestation?

“Does the NBA think Nigerians will continue to respect this administration if the Federal Government (FG) announces a national award for the suspended CJN just as some people did in the past?

“What we know of this regime is that it upholds human dignity, freedom of the press, free speech and the rule of law. What else does NBA want for the suspended billionaire CJN?

“Option 4 is a satanic option. It offends the principle of natural justice. Why should the new acting CJN resign? What offence has he committed?Is it a crime to be a Northerner? NBA should eschew ethnic jingoism.

“We are not unaware of hate speeches in video clips targeted at the new acting CJN but we do not expect NBA to buy into tribal particularism. We believe in a united Nigeria. We respect and love lawyers but we love Nigeria more. We do not expect less from our lawyers.

“NBA’s satanic option 4 is reminiscent of the story of the two women who brought their case to Prophet Daud (peace be upon him). A wolf had taken one of the children away and there was a dispute concerning whose child was still alive.

“Prophet Daud declared the older woman as the owner but Prophet Sulayman (peace be upon him) who was the son of Daud and whom Allah gave more wisdom than his father reviewed the judgement.

“He said, ‘Bring me a knife so as to cut the child into two pieces and distribute it between them’.

“Although the older lady agreed, the younger lady said, `May Allah be merciful to you. Don’t do that, give the child to her, it is hers.

“So who deserves the post of CJN between Justice Onnoghen and Justice Muhammed Tanko? Whose child was carried away by the wolf, Onnoghen or Tanko?

“NBA wants the child cut in two halves! NBA has surprised us with this strange suggestion. Who has a case to answer? Who abused his office? Who is the billionaire CJN?

“How many days has Tanko spent in office as acting CJN? Is it possible for eminent members of the NBA to also join the camp of haters and wailers? Why are we like this in this country? Who cursed Nigeria?

“We are confounded by option 5. NBA is pledging to ‘prevail’ on relatives, friends will ‘persuade’ Justice Onnoghen to resign. We reject this option. It is infantile, pedestrian and preposterous. NBA is spoon-feeding Onnoghen. What concerns the Nigerian public with ‘relatives’ and ‘friends’ in this matter?

“So NBA wants a whole Nigeria with 200 million people to start prostrating for a single person? Must we prostrate for a cow because we want to eat beef? Is that it? Should it be so? No, it had better not be. Nigeria is bigger than the suspended CJN. How can such a peripheral issue supplant the tangential?

“It is an attempt to turn Onnoghengate to a comedy. That suggestion should be sent to Nollywood or reserved for the senator who spent 19 hours on treetop. We are being serious here please.

“Option number 6 concerning the need to clean up the judiciary appears to us to make the most sense. Our judiciary stinks and a total overhauling of the system is long overdue. This should be done as soon as possible.

“We appeal to the NBA to call a spade a spade. The body of lawyers should avoid spite and the pull-them-down syndrome. NBA appears to be cutting its nose in order to spite its face.

“This seems to be what the association is doing by trying to extenuate the offence committed by Justice Onnoghen while demonising Justice Tanko. Is the NBA not biased?

“Isn’t Justice Tanko also a member of the legal body? How should we judge an association that treats one member as a sacred cow and pushes another onto the rail line when a train is approaching at full speed? It is the most odious and insidious segregation. NBA needs to reassess itself.

“If Nigerians agree that our judiciary needs cleaning up, the man to do it is President Muhammadu Buhari. He has the necessary qualities for the task. The boldness, the determination, the ascetic mien and the incorruptibility are the effective weapons needed for the job and he already possesses them.

“But we are already in the twilight of his first term in office. Nigerians will definitely need him for a second term particularly to clean the Augean stable.

“As we rise from this intervention, MURIC charges the Federal Government to immediately set in motion the machinery for overhauling the Nigerian judiciary. It is a miscarriage of justice to ask the newly appointed acting CJN to resign. He should continue his work.

“On the contrary, it is the suspended CJN who should resign honourably now. The Presidency should apply Solomonic wisdom to Onnoghengate by sparing the ‘innocent child’