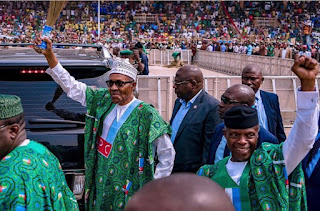 The Vice President, Yemi Osinbajo on Tuesday declared that more unemployed graduates will be “coopted’ into the Federal Government’s youth empowerment scheme, N-Power.


While speaking during the All Progressives Congress, APC, Presidential rally in Ondo State.
He reassured that job creation and empowerment initiative of the APC government will be tripled when the government is re-elected.

He also explained that the APC government will continue to ensure that the monies of the people will work for the people, adding that all could attest to the integrity and uprightness of President Buhari.

Osinbajo said :
“The successful persons here are the ones who have decided to vote for a leader that fights tooth and nail against corruption and such a leader is President Muhammadu Buhari.

“I’ll be speaking on the three cardinal issues that are of paramount importance to this administration and one is, work for the youths.

“The President is really interested in ensuring that our youths are gainfully employed. Our universities and polytechnics produce 1.7 million graduates annually and these graduates enter into the labour market after NYSC.

“This was the main reason why we had to set up the N-Power scheme.

“We currently employ 500 thousand persons, but this is just the start as our target in the next level is to employ 1.5m individuals
POLITICS